Chronic Pain & Couples: Learning to Find Each Other in the Shadows 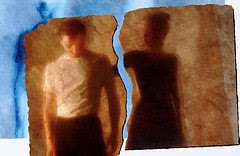 For couples, when illness lingers and turns our path towards a dark unknown, we start to become shadows to each other.

The present is too often a fragmented reflection of what used to be. The invitations we can't accept, the activities we can't do, the conversations we don't want to be part of are reminders of a brighter time in our life that now stands in the shadow of illness. When I was living with uncontrolled pain, my days were consumed in attempts to stay just a few inches ahead of the next spike. A sunny morning, the aroma of coffee, or a good book, had no meaning. Cheery news from a friend was almost unbearable.

As I moved farther away from life, into the shadows of illness, I drifted to a realm where Richard could not follow. He could watch and reach out towards me, but he could not enter. He didn't have the right ticket, and I had no return.

We started becoming shadows to each other, our vitality dimmed by all those sweet things we could no longer hold onto. When he looked at my face he saw the gray mask of illness. My eyes no longer focused on the world and only offered him flashes of someone he once knew. Every time he left the house to go to work or the gym or have dinner with a friend, I felt relief at his remaining connected to normalcy; but each venture broadened the shadowland that was growing between us.

I think had we not had such a long history together, and had we not already learned to face one another and speak the hardest truths, we would have lost each other. The shadows would have eventually rendered us unrecognizable.

How did we learn to keep finding each other?

We never learned to dispel the shadows, but we found ways of creating new venues where we could see each other more clearly. Places that had no ties to our earlier times and were therefore immune to a gathering of shadows.

We learned to sit in silence together. Our old life was one of activity. Now, in silence, we could slow down enough to feel something essential for each other, something that endured.

We discovered the small things that gave us comfort. Our old life was about big things -- vacations, climbing mountains, work achievements. Now Richard stroked my hair and read aloud Jane Austin or Tolkien. When I prepared the colorless, bland foods I could eat, I offered him some. When he was at work, he texted me to let me know he was thinking of me and hoping I was having an ok day. I texted him to let him know when I had good moments. On Sunday nights at 9:00pm, no matter how uncomfortable I was, we watched the Sopranos.

We spoke about our fears of losing each other. And each time we did, naming the fear diminshed it. 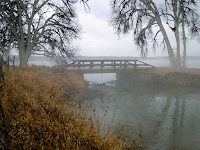 We learned to build bridges to each other, above the shadows.
Posted by Barbara Kivowitz at 10:47 AM

Well done. My husband and I have not managed well. We are two ships passing in the night. Chronic daily migraines, 10 years.

Thank you for writing this! I know it's an older post, but I have discovered your blog and have been devouring it. I am 22 years old, have arthritis in my spine and tendonitis in other joints and live in chronic pain. I have only been married for a year and a half, and we want to keep those years growing and not give up. Your little honest thoughts feed hope into us!

Yes, thank you so much for starting this blog. I have found great comfort in it as well. In particular, I found this post to be beautifully written and inspiring. I am 36, divorced and have almost full parenting time of my amazing 4 1/2 yr old son. Since my sons birth I have been dealing with an undifferienciated autoimmune disease, with daily chronic pain and bi-monthly flares. After my divorce I met an amazing man who I am now living with. He is so supportive of me and my son on so many levels, sometimes I feel like pinching myself as it feels to good to be true. But ( I know, a but) now that we live together, and domestic life has set in, things are getting more complicated. The load of responsibly due to my illness, the ups and downs, and the depression are starting to weigh on him. For me, the unknown financial security and long term commitment to marriage seem to be the ongoing fear. Although he assures me he is in this for the long haul, I just worry that we have different views on what commitment looks like. For example; I have been battling with going part-time for the last couple years as I am unable to manage being a single mom, deal with chronic pain/ doctors appointments/ drug side effects and work full time. I have not felt that my partner is willing to or able to make this financial sacrifice( especially now) but possibly not in the future. I find myself becoming resentful Do you have any advice for unmarried couples and how to cope with chronic illness in particular to finances? Thanks!

I'm glad you find this blog helpful. Living with pain is consuming, and it ripples into so many areas. I think issues of commitment, finances, and balance are issues all partners living with illness face. The two biggest lessons I learned in coping with illness and my primary relationship are check out your assumptions and talk about everything. Unpack what you see as the elements of commitment and of financial sharing. Ask your partner to do the same. Listen deeply to each other, as non-defensively as possible. Listen first for understanding. Then for similarities. Then for differences. And while listening and sharing, insert as much love and compassion as possible. The longer you don't listen and talk deeply, the more resentment and unvalidated assumptions will be built up. Speaking your truths may feel awkward, vulnerable -- but it changes things. It unsticks. I wish you comfort. 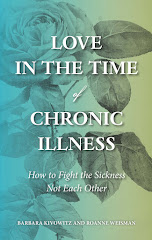 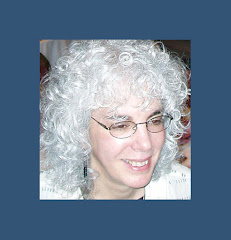